#3. A group of people sit cross-legged on the ground in a circle. They all face the outside of the circle, with their backs turned to the center of the circle. Everyone in the circle holds their head down with both hands over their head. No one sees or touches another person.

These three images of “Covid” were created in the “Rehearsals for Change” workshops that took place in the past three weekends. We were asked to use the bodies of other participants to build a “sculpture” of “Covid” (Boal 143). As in Boal’s Image-Theater, we were “not allowed to speak under any circumstances” (144). Instead of verbally expressing our opinions about “Covid,” we had to come up with a “physical representation” of it (144).

Boal’s Image-Theater (like his Poetics of the Oppressed more broadly) focuses on the body as a means of theatrical production. “The means of production of the theater are constituted by [people] . . . the first word in the theatrical vocabulary is the body, the main source of sound and movement” (131). To get to know one’s own body and to make it “more expressive” are arguably the most important steps in Boal’s Poetics of the Oppressed and its goal of transforming “spectators” into “actors” who “assume the protagonist role, change the dramatic action, rehearse possible solutions, [and] discuss plans for change,” thus “preparing themselves for real action” (126).

In his discussion of Image-Theater, Boal mentions themes like “imperialism” or more “local problems, like the lack of access to running water” (143). Reading Boal’s TO in the context of the ongoing global pandemic, we think of “Covid,” and the focus of Image-Theater on non-verbal physical expression seems particularly conducive to representing “Covid” if we consider the ways in which many experiences and emotions associated with the pandemic seem to defy verbal articulation. As Bessel van der Kolk writes in The Body Keeps the Score, the “imprint” of painful experiences are often “organized not as coherent logical narratives but in fragmented sensory and emotional traces: images, sounds, and physical sensations” (211). In our workshops, many of us mentioned the sound of ambulance sirens and the image of refrigerator trucks parked at the entrance of hospitals — two “traces” (one sonic, one visual) that powerfully express something about our experience of the pandemic. If many “imprints” of the ongoing pandemic are organized in “traces” such as images, Boal’s Image-Theater offers us a tool to use our bodies (the same bodies that “keep the score” of what we’ve been going through) to express and share these “traces.”

In Image-Theater, a participant is asked to build a “physical representation of the proposed theme,” and, subsequently, “another image showing how they would like the proposed theme to be. In other words: the first grouping shows the real image, while the second shows the ideal image. With these two images, a participant is asked to show what would be, for them, the transitional image. We have a reality that we want to transform; how do we transform it?” (Boal 144). Using the example of a young woman who lived in a “small pueblo, called Otuzco,” in Peru, Boal describes an image in which leaders of a peasant revolt were publicly tortured in the town’s central square (144). Boal describes this image as “terrible, tragic, pessimistic, defeatist, but, at the same time, an image of something that really happened” (145). The young woman transformed this real image into an ideal image in which “people worked in peace and loved each other . . . in short, [the image of] a happy Otuzco” (145). 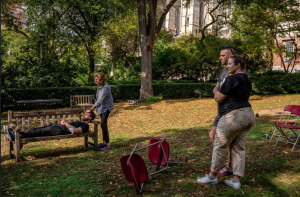 What happens when you have a real image that isn’t only “terrible, tragic, pessimistic, defeatist”? The image of “Covid” that Thomonique created in our first workshop has things we would probably like to change. We would like to see health workers (the person with one of their hands placed on the forehead of the person lying down) also cared for and comforted, and justly compensated for their essential labor. We would like to see family members (the two people standing behind the barricade of chairs) not totally isolated from their loved ones, somehow feeling like they too are caring for and comforting each other in a difficult moment. And yet, as the person lying down in this particular image, I felt the warmth of Susan’s hand on my forehead. Similarly, Julie, who was embraced and held in Image #2 (created by Nazia), expressed feeling comforted and protected. “Gestures of comfort” like touching or holding “makes us feel intact, safe, protected, and in charge” (Kolk 253). Touch, when “attuned” (253) and “mindful” (254), is “the most elementary tool that we have to calm down” (253). Such “gestures of comfort” and the affection and hope they elicit are things we would like to keep as we struggle to transform our reality into something closer to what we want it to be. 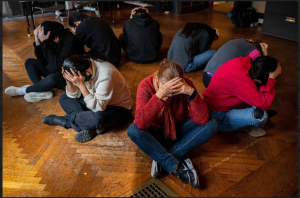 Perhaps the real image of “Covid” in most need of transformation is Image #3 (created by Leah). The gestures in this image seem to be gestures not of comfort but of distress, especially the gesture of holding one’s head down with both hands. This is the only image in which people touch themselves, but not others. They are in the same circle, yet deeply alone. Maybe we would like each person in the circle to place one of their hands on someone else’s forehead, and to have another person’s hand placed on their forehead. Maybe we would like each person in the circle to hold someone else, and to be held. If this is the real image of “Covid,” maybe the ideal image would not be that different from the circle with which we closed each of the workshops — one where everyone stands turned to the center of the circle with arms interlocked with those of the people next to them. If this is the ideal image, what would be the transitional image? How do we get from the circle in Image #3 to the circle at the end of the workshops? Maybe the workshop is the transition, the circle of chairs where we first meet at the start of the day, and the circle of chairs where we later discuss the images of “Covid” and what it means to us before standing up for the final circle. 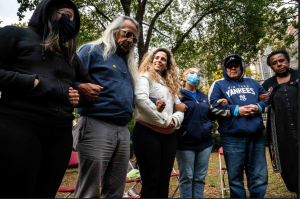 Image-Theater is “one of the most stimulating [forms]” of the Poetics of the Oppressed (147). It stimulates the “desire” to practice what was rehearsed in the workshops, a “certain lack of satisfaction” that Boal calls “ímpeto revolucionário” — a moving force that seeks “fulfillment” through political struggle (152). Together, the three images of “Covid” that came out of our workshops suggest that gestures of comfort and the feelings they elicit are key to any “ímpeto revolucionário” and to our struggles to change the unjust realities that have been exacerbated by the ongoing pandemic.

Kolk, Bessel van der. The Body Keeps the Score: Brain, Mind, and Body in the Healing of Trauma. Viking, 2014.

“The Last Best Hope,” a podcast  from Oxford University hosted by Alice Kelly, in which Marianne Hirsch and James Young discuss Covid memorialization and the ZCMP