The “Many-Sided Play” of the Body

I’ve been thinking about a passage from Boal’s Theater of the Oppressed that Diana mentioned in our seminar on November 12, where Boal talks about the differences between “the muscular structure of a typist [and] that of the night watch[person] of a factory. The first performs [their] work seated in a chair: from the waist down the body becomes, during working hours, a kind of pedestal, while arms and fingers are active. The watch[person], on the other hand, must walk continually during [their] eight-hour shift and consequently will develop muscular structures that facilitate walking. The bodies of both become alienated in accordance with their respective types of work” (103-104).

Boal seems to be directly drawing on Marx’s claim in Capital “that a worker who performs the same simple operation for the whole of [their] life converts [their] body into the automatic, one-sided implement of that operation” (458). The social division of labor, “the transformation of the body into a [specialized] work-machine” (Federici 63), and, for Marx, “all methods for raising the social productivity of labour,” like the implementation of new machinery in a factory, “distort the worker into a fragment of a [person], they degrade [them] to the level of an appendage of a machine, they destroy the actual content of [their] labour by turning it into a torment; they alienate [entfremdem] from [them] the intellectual potentialities of the labour process in the same proportion as science is incorporated in it as an independent power; they deform the conditions under which [they] wor[k] . . .” (799).

Marx’s use of the terms “distort,” “degrade,” “destroy,” “deform,” and “fragment” to describe the effects of work makes me think of “repair” — the attempt “to organize fragments” (146) into a “whole,” but “not necessarily like any preexisting whole” (Sedgwick 128). For Boal, the attempt to “repair” what he calls “muscular alienation” begins with exercises designed to make participants “aware of [their] body, of [their] bodily possibilities, and of deformations suffered because of the type of work [they] perfor[m]. That is, it is necessary for each [participant] to feel the ‘muscular alienation’ imposed on [their] body by work” (103). 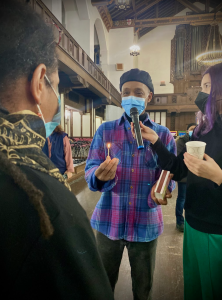 In our Aquí/Here workshop, some of the exercises seem designed to make us aware of the often intersecting effects of work and the pandemic on our bodies. Holding a burning match, we were asked to say what our bodies have gained and lost during the pandemic. This exercise made me think of how many hours a day I spent sitting in a chair in front of my laptop reading, writing, grading, and teaching on zoom. It also made me think of how often I went out for walks in my neighborhood, reminding myself of what it feels like to randomly stroll up and down streets without thinking I had to get from point A to B in a given time. In the body-map exercise, we were encouraged to locate experiences and feelings on our bodies, to become aware of how our bodies have been “keeping the score” both of work and the pandemic, and to re-embody our experiences and feelings so they can be shared. I also think of exercises designed to “disjoint” or “undo” our “muscular structure,” as Boal puts it, “[n]ot to weaken or destroy them, but to raise them to the level of consciousness” and “assemble” it in different ways (104), as when we were asked to walk around the room changing pace and direction, very fast and very slow and everything in between, or, in our earlier Rehearsals for Change workshop, to “follow the leader” running around, dancing, lying down. 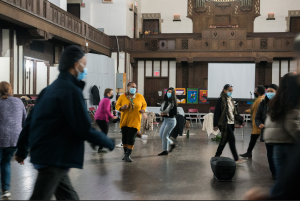 In Capital, Marx laments the ways in which work, especially factory work, “does away with the many-sided play of the muscles” (548). How have our workshops attempted to “repair” “the many-sided play” of our bodies? Marx’s phrase makes me think of another moment in the Aquí/Here workshop, when, after drawing our body-maps — some of which represented a person sitting down in front of a screen, reminiscent of Boal’s image of the typist in “a kind of pedestal, while arms and fingers are active” (104) — we each stood in front of our maps, and, playing, created a choreography out of our body’s cartography. 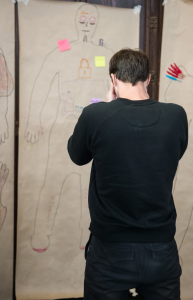 How do we think of “rehearsal” and “repair” together? The two words share the prefix re-, whose original sense in Latin is “back” or “backwards.” Prefixed to verbs of action like “rehearse” and “repair,” it Read more…

Reflecting on the Body in George & Maria’s Workshops

The central focus of George Sanchez and Maria Jose Contreras’ workshops (in October and November respectively) was the body: the body that “keeps the score” of its habits, desires, and accumulated traumas, whether or not Read more…