How do we think of “rehearsal” and “repair” together? The two words share the prefix re-, whose original sense in Latin is “back” or “backwards.” Prefixed to verbs of action like “rehearse” and “repair,” it often denotes repetition and restoration (OED).

From a temporal perspective, “rehearse” and “repair” seem to have opposite orientations. To “rehearse” means to (repeatedly) perform an action in preparation for a future situation (OED). This is what Boal has in mind when he writes that “the spectator rehearses, preparing themselves for the real action” (126). To “repair” means “to restore (a person or group of people) to a previous state,” which suggests that “repair” is oriented toward the past (OED). But to “repair” also means “to heal or cure (a wound, injury),” “to remedy or put right (an undesirable condition or situation)” (OED); it means to make something “good” or “whole” again (wiedergutmachen), as Marianne has pointed out, and “not necessarily like any preexisting whole” (Sedgwick 128). To “repair” in this sense is to do something “again” (“a further time, once more”), but also “anew” (in “a new or different way”); it’s “to create something which has not existed before” (OED). This understanding of “repair” resonates with the feeling expressed by many of us that we are creating this project as we go along, thinking ahead but also discovering things on the spot.

“Rehearsal” and “repair” share an orientation toward the future, toward that “which has not existed before,” but which we can “rehearse” in the present. “Rehearsal” and “repair” are both closely tied to a notion of the possible, rather than the inevitable (Sedgwick 147). The “rehearsal” of change in exercises like “the transformation of objects” and forms like image-theater are all about stimulating the feeling that “everything is changeable” (Boal 142), and that it’s possible to transform our reality into something closer to “ideal images” of what the world can be. Practices of “repair” are also about encouraging us “to glimpse the lineaments of other possibilities;” about “realiz[ing] that the future may be different from the present,” and “that the past, in turn, could have happened differently from the way it actually did” (Sedgwick 146).

In their orientation toward the future and attachment to possibility, “rehearsal” and “repair” can be understood as informed by a utopian impulse. I draw on Paulo Freire’s notion of utopianism as a mode of thought and practice characterized by an understanding of “history as a time of possibility, not of predetermination,” and of the future “not [as] a ‘given,’ but rather a challenge, a problem” (59). Many of the postcards produced by ZCMP participants express this utopian impulse. It comes up in the recognition that “many deaths could have been avoided.” Echoing Raymond Williams, this card reminds us that the tragedy is “not only that suffering is avoidable, but that it is not avoided” (202). 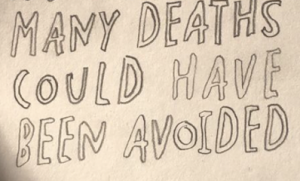 It comes up in the sense of loss of any “certainty about what the future would bring,” which can be a source of anxiety and fear, but can also make room for “new possibility” and for the feeling that “together we can imagine and create better worlds.” 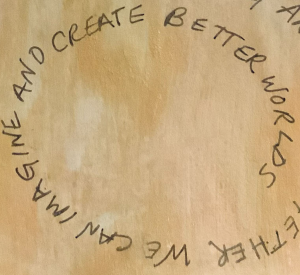 In another card, the utopian impulse takes the form of a series of questions: “How many more will be taken from us? Will we choose love? Will we fight for all of us?” The future may be different from the present. As this card suggests, the future is an open question, a “problem,” as Freire puts it, whose answer depends on what we’ll choose and what we’ll do—on whether we’ll come together and fight for all of us with love and hope.

“The Last Best Hope,” a podcast  from Oxford University hosted by Alice Kelly, in which Marianne Hirsch and James Young discuss Covid memorialization and the ZCMP